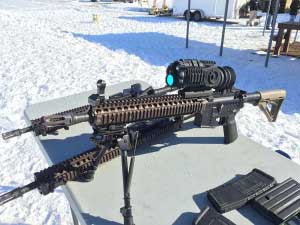 SPI CORP completed a successful & informative firing demonstration of their prototype multi sensor smart scope at FT AP Hill for the DARPA CWO team. SPI plans on implementing further enhancements and improving on their design for the final demonstration to DARPA coming up in March 2015.

SPI CORP completes the first on range live fire prototype test of the CWO project for DARPA.  This is the first test of the separate sensor systems, embedded electronics and software that has been conducted in a fully operational prototype system.  The test was conducted at FT AP Hill in near zero degree weather. The results were positive and SPI CORP learned many lessons they will use to improve the concept further.  A final demonstration of the project progress is slated for March 2015.

In preparation for the final demonstration, SPI will go over their acquired data from all previous testing and implement the adjustments necessary at their Imaging Excellence Lab located in Las Vegas, NV.  The unit will be subjected to a series of further rigorous testing before the upcoming March deadline. This versatile multi sensor system promises to have increased range, shock resistance & flexibility for use on crew served larger caliber weapons as well as standard combat weapons, making it a game changer in heavy combat operations.

A Multi Sensor Smart Scope for the Modern Warfighter

SPI Corp’s main goal in the DARPA CWO project is to not only enhance current technologies available to support our nation’s military, but expand on ideas to revolutionize modern warfare.   By engineering a multi sensor smart scope solution, SPI CORP seeks to provide the ultimate in situational awareness to support and protect military operators in the field of combat while maximizing their effectiveness in the battlefield.  With over a decade of experience in thermal imaging & night vision technology, SPI CORP is dedicated to accomplishing prototype improvements to meet and exceed the established DARPA CWO project standards.