Thermal imaging equipment is helping NASA to monitor a rocket’s first stage of re-entry to obtain information that will be vital in upcoming Mars missions. 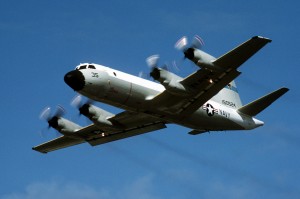 A Navy NP-3D Orion (like the one pictured above) loaded with thermal imaging equipment monitored the NASA re-entry study of the Space X Falcon 9 rocket.

NASA began the study by using the Space X Falcon 9 rocket system.  The Space X Falcon 9 rocket was launched in September from Cape Canaveral, FL, and NASA used several aircraft loaded with telescopic Mid-Wave infrared (MWIR) thermal imaging equipment to film and document re-entry of the rocket’s first stage. (The first stage is the part of the rocket that is ignited upon launching and breaks away from the rocket after it’s propellant is spent at the beginning of the second stage, then falls back to Earth). What’s interesting about this model of rocket is that instead of the first stage being discarded as scrap, it uses its own rockets to guide itself back down to the ground so it can be reused again in the future.

NASA used its thermal imaging equipment to take high definition thermal images of the decent to monitor smoke plumes as the engines were turned on and off.  This experiment was conducted at an extremely high altitude on Earth that is very similar to the ground level altitude of the atmosphere on Mars’ surface. The data they collected from the study will help NASA to develop better landing systems for upcoming missions to the red planet. “Because the technologies required to land large payloads on Mars are significantly different than those used here on Earth, investment in these technologies is critical,” said Robert Braun, principal investigator for NASA’s Propulsive Descent Technologies (PDT) project & professor at the Georgia Institute of Technology in Atlanta. “This is the first high-fidelity data set of a rocket system firing into its direction of travel while traveling at supersonic speeds in Mars-relevant conditions. Analysis of this unique data set will enable system engineers to extract important lessons for the application and infusion of supersonic retro-propulsion into future NASA missions.”

Various Types of Thermal Imaging Equipment Used in the Study

NASA’s Scientifically Calibrated In-Flight Imagery (SCIFLI) project team at NASA’s Langley Research Center in Hampton, VA used various angles with the thermal imaging equipment to pursue the rocket while in flight, mounted on aircraft from the US Navy and NASA.  A Navy NP-3D Orion aircraft from the Naval Air Systems Command Weapons Division’s Air Test and Evaluation Squadron-30 was equipped with a long-range infrared camera system to take thermal images of the rocket launch, and a NASA WB-57 high altitude twin engine jet used a pan tilt zoom gimbal infrared camera system to take high resolution thermal images and video of the test. Both aircraft monitored the experiment from about 50 miles from the rocket’s trajectory to obtain the necessary thermal supersonic retro-propulsion data of the first stage’s re-entry.

In addition to the main objective of engineering re-useable landing systems for upcoming Mars missions, NASA is trying to drastically reduce the costs of space travel with innovative affordable solutions.“Through our partnership with SpaceX we’re gaining access to real-world test data about advanced rocket stage design and retro-propulsion,” said Michael Gazarik, from NASA Headquarters in Washington. “Through this partnership we’re saving the taxpayer millions of dollars we’d otherwise have to spend to develop and test rockets and flights in-house. This is another great example of American companies partnering with NASA to enable our future exploration goals.”

SPI Corp is dedicated to developing & engineering affordable and innovative thermal imaging equipment like the ones used in this study, and strives to provide the best custom thermal imaging systems possible on the market today.  For information on what we can engineer for you, please call us at (702) 369-3966, toll free at (800) 403-2983, or email us at sales@x20.org.