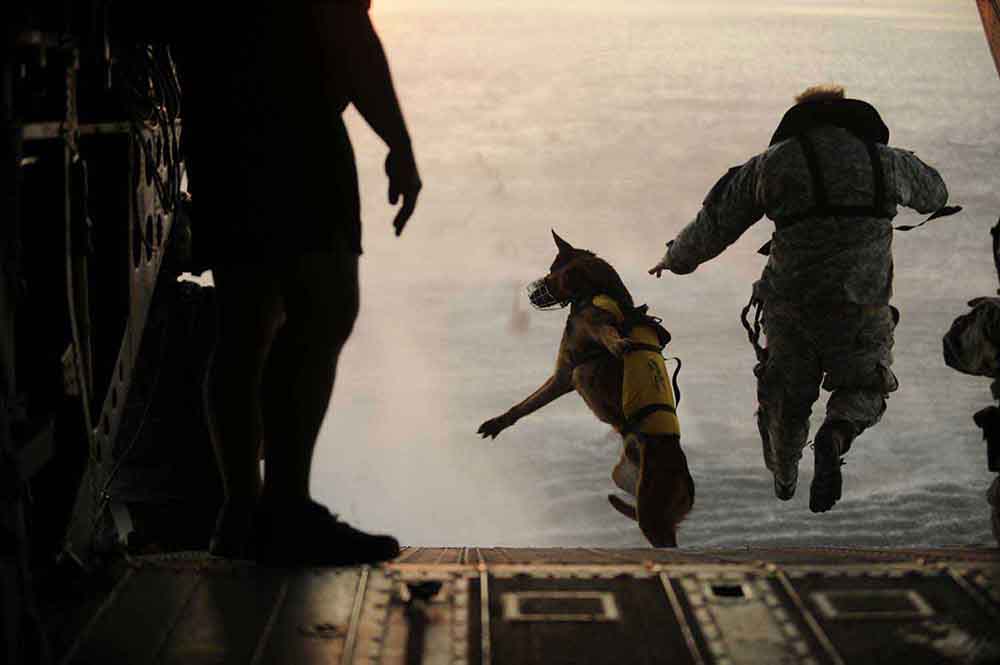 You taught your Pomeranian how to fetch, bully for you. But I bet your four-legged snack can’t do what these dogs do, even in their most kickiest dreams.

It’s no big secret that Navy SEALs have been using canines with infrared cameras & night vision equipment on military raids.  Most famously, the Belgian Malinois named “Cairo” who was part of the Elite SEAL Team 6 who double-tapped Osama Bin Laden into the afterlife.  Time and again they’ve proved themselves worthy operators on the battlefield.  So much so that Gen. David Petraeus,  former commander of our military forces in Afghanistan, said of the canines with infrared cameras, “The capability they bring to the fight cannot be replicated by man or machine.  By all measures of performance, their yield outperforms any asset we have in our industry. Our Army would be remiss if we failed to invest more in this incredibly valuable resource.”

Now stateside LEOs are taking the lead to bring these systems into daily practical use with their canine teams.  Most recently, the Binghamton PD in NY.

The working dogs are fitted with ballistic vests, and the infrared cameras & night vision devices are being placed on their back, high enough to get an unobstructed view from over the dog’s ears, nearly a prefect line of sight of the the canine is viewing.   When the dogs are sent in, officers can monitor what the canines with infrared cameras are seeing remotely in order to perform risk assessments of the situation at hand in real time from the dog’s point of view.  And according to Binghamton Police Capt. Chris Bracco, he’s pretty much on the same wavelength as Gen. Petraeus when it comes to adding sophisticated technology to an already formidable Shutzhund-trained K9 four-legged officer.

“When we make entries into a building, or into a home, or in a high risk situation, there’s always a possibility for an ambush,” he said in a recent interview with Action News 12 in New York. “We want to have all of the intelligence information available to us before we send our officers into a location.”

NYPD has been using canines with infrared cameras for a few years now.  “The cameras can save officers’ lives by enabling us to see what’s down the field before we go there,” said Lt. John Pappas, who has commanded the transit bureau K9 unit since 2006.  Other elements integrated into their K9 units thanks to grants from FEMA and the TSA are GPS devices, illuminated collars and specialized trucks to accommodate climate control and sustenance for the canines in varying conditions including disaster relief.

Why Canines with Infrared Cameras and Not Robots?

Often times, robots are used in certain situations for surveillance and bomb detection.  But canines with infrared cameras offer an advantage over their non-living counterparts; they can go into positions robots cannot.  For instance, robots cannot move as efficiently through entryways and doors like dogs can, and most of all, they can’t climb stairs and intimidate a suspect or keep them at bay with their extensive training.  Nor can robots track targets as efficiently as a canine nose can.  And until “Robo Cop” like machines become a reality, canines are some of the best resources military & law enforcement have at hand.

Thermal imaging technology has always been an amazing advancement when it comes to law enforcement and military.  But when coupled with one of our most valuable assets, man’s best friend, it truly goes where no man has gone before.

* Pictured above, a U.S. Army soldier with the 10th Special Forces Group and his military working dog jump off the ramp of a CH-47 Chinook helicopter from the 160th Special Operations Aviation Regiment during water training over the Gulf of Mexico as part of exercise Emerald Warrior 2011 on March 1, 2011. Emerald Warrior is an annual two-week joint/combined tactical exercise sponsored by U.S. Special Operations Command designed to leverage lessons learned from operations Iraqi and Enduring Freedom to provide trained and ready forces to combatant commanders.   DoD photo by Tech. Sgt. Manuel J. Martinez, U.S. Air Force. (Released)

Related Things to Read about: