Custom infrared cameras mounted on UAV drone systems are fast becoming an effective tool to combat rhino & elephant poachers in Africa. Since poachers operate during the stealth of night during a full moon, thermal imaging systems like night vision goggles are necessary to find them and stop them in the dark. And with the number of rhinos being killed in South Africa’s Kruger National Park rising by 5000% since 2006, park rangers need whatever edge they can get.  According to Johan Bergenas, a researcher at the Stimson Center, conservation groups need to “combat poaching, using new and inexpensive technologies to detect and deter terrorist activities and traffickers,” he also stated, “Drones, satellite imagery, tracking devices and other high-tech tools could transform the fight to save elephants and rhinos, cheaply and effectively starving terrorists of the easy money they gain from wildlife crimes.”

Many organizations are stepping up to help. In 2012, Google donated $5 million to the WWF as part of their Global Impact Awards to develop UAV drones equipped with custom infrared cameras to more easily track down poachers in the dark.  Being able to monitor activity from the sky has many advantages. For one, the poachers themselves can be a very dangerous lot, utilizing semi-automatic rifles and other weaponry. Rangers can watch from a safe distance away and assess threats properly to be able to confront them efficiently. The drones are much harder to hear than helicopters as well, so the poachers don’t notice them if at all, until it is too late. It’s also much safer where rangers dealing with wild animals are concerned, being many hunt nocturnally and no one wants to be confronted by an angry elephant on the charge.

The key to the success of using custom infrared cameras on drones is simple; stop the poachers before they even have the chance. 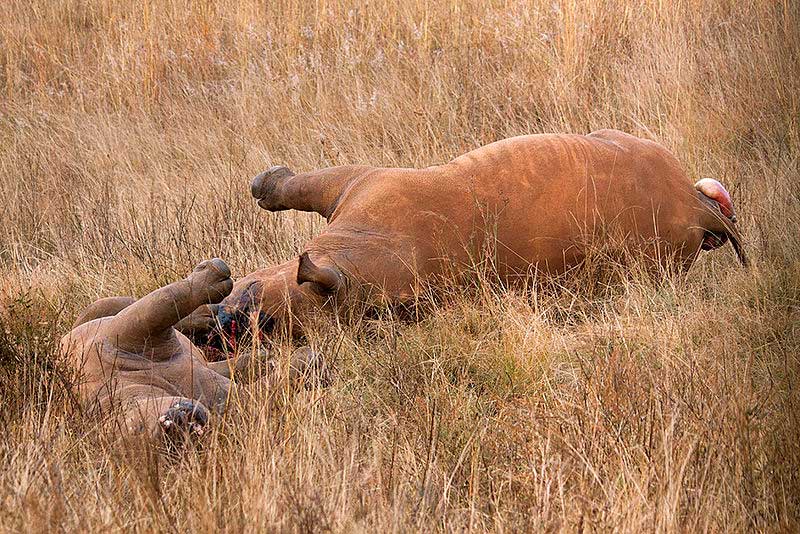 Custom infrared cameras on UAV drones are being deployed to help stop poaching. Above, two rhinos lay dead after poachers shot them for their horns.