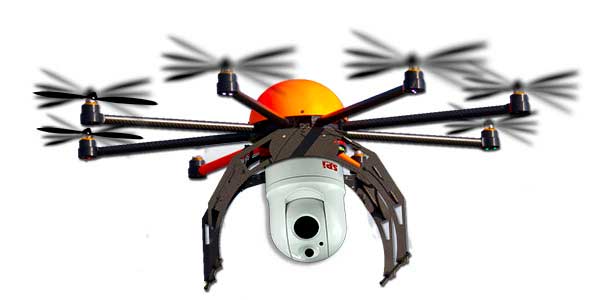 Drones with thermal cameras will now be patrolling city streets in New Delhi in attempt to curtail crimes against women in the city, a massive problem over the years in India.

Last week an Uber driver was accused of raping a 27 year old executive in New Delhi, India after she hailed a cab to get home after dinner using the increasingly controversial app on her phone.  The driver allegedly diverted his route, switched off his cellphone and raped the woman, according to police. This is sadly not the first incident involving sexual assault against a female in the area.  Reportedly, in another city in India, Mumbai, in 2014 alone, “the city has endured over 300 cases of sexual harassment against women, over 500 rape cases and over 1,000 cases of outraging of modesty.”   In 2012 a woman was beaten and gang raped on a bus, triggering mass protests and politicians promising reform, increasing penalties for rape. Sadly, harsher penalties have done little to address the issue. Over the past years, activism has raised awareness through the “Equal Streets” movement, but now in light of the continuing and very severe problem, police recognize the need for other counter-measures due to stricter laws’ ineffectiveness at deterring crimes against woman.

In an article in the Times of India, a police official stated that, “With this project, north Delhi will become the first district with complete camera surveillance in Delhi. This would be achieved with the combined range of with CCTVs and drones. The only areas which will be kept out of it will be the LG house, Delhi assembly and Metcalfe House.”  He went on to say,  “We can further enhance its capabilities by linking each drone to a Quick Response Teams (QRT). The video can be streamed to the QRT vehicle which will monitor it in real time and respond quickly if it sees something wrong.”

The project implementing drones with thermal cameras is slated to begin in the north district of the city next month, the same area in which the Uber rape occurred last week. The plan is for the drones to fly at a height of about 200 meters and they will survey hexagonal grids of the are of about 3-4 kilometers. They will be monitored in such a way remotely to ensure drones do not overlap and the area is totally covered. Additionally, police hope to deploy drones at every entryway to the district in order to track every vehicle entering the area.

The police official also noted, “It will also have anti-shaking software which will cancel any tremble in the video caused by the rotating blades of the flying machine and provide us steady picture. It will be capable to operate under all weather conditions. We will deploy three to four drones in the entire district and each one of them will cost around 10 lakh.”  (*Roughly around $22,000 USD). Until now, police had been renting drones with thermal cameras from the DRDO  (Defense Research and Development Organization) for about 50,000 rupees a day. (about $800 USD). The program will undoubtedly expand to other areas if proven successful.

Drones with Thermal Cameras?  SPI Can Make it Happen!

SPI Corp proudly manufactures and engineers a full PTZ (pan tilt zoom) thermal camera solution that would be perfect to implement in this situation. Our M1D model is completely customizable to any specification, and is so small that it can be carried by small drones.  The until weighs under 3lbs, has magnetic and hard mounts and is available in a wide array of configurations to suit any mission profile. We also offer image stabilization modules, and various other options including wireless capability, base models starting at only $3999! (That’s way less rupees than the Indian police are paying)!

Its only a matter of time before drones with thermal cameras become a main staple in law enforcement and security applications worldwide. The possibilities are endless with the M1D. Why not try one on for size?

Drones with thermal cameras – the M1D mounted on a drone (pictured above). The M1D is versatile, small and completely customizable to your mission specifications. Call us today to discuss available options. (702) 369-3966 in Las Vegas, or toll free (800) 403-2983.