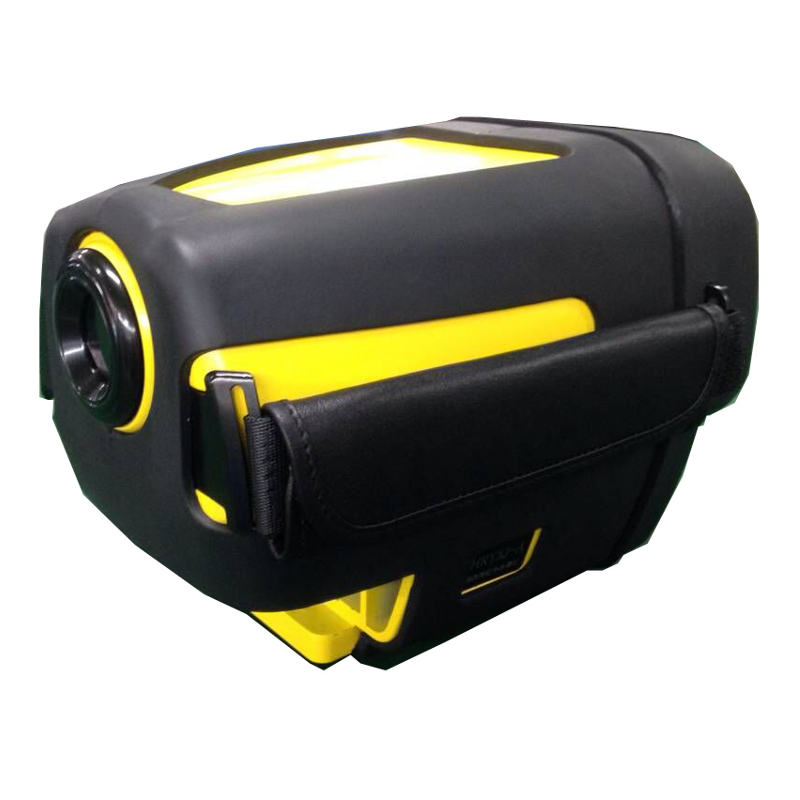 The SPI HEATIR is a specially designed thermal infrared camera that can be used by firefighters or those who work in fire protection. The HEATIR thermal camera allow users to see clearly in areas that are affected by dense, thick smoke.

SPI HEATIR is available in two different resolutions, currently it is available with a 160×120 or 384×288 IR Detector. This allows the user to select the IR Detector that is most suited to their application and budget. Both models provide the same operational functions.

This infrared firefighting camera has a built-in infrared lens to ensure the optical system is well protected. It has a wide angled lens which gives a wider field of view to the user to provide better situational analysis.

The SPI HEATIR can take still images and IR Video for up to 2 hours which are saved internally. The camera has a battery life of 2.5 hours.

The SPI HEATIR has IP67+ encapsulation which means it is fully protected against dust and water immersion up to 1 meter.

This thermal imaging camera is ideal for firefighting or rescue work, as it can withstand extreme environments and can locate injured or unconscious persons in a fire or forested area easily. It can also assist those working in the fire protection industry to evaluate where a fire may reignite and take actions to prevent the fire from spreading further.

As firefighters, our sight is one of our most precious commodities. But when fighting a fire, smoke can quickly rob us of that sense, essentially “blinding” us and handicapping our ability to perform effectively, find the seat of the fire and/or locate victims. Because of this, generations of firefighters have yearned to “see” through smoke—and now they can. In the past 15 years or so, thermal imaging cameras (TICs) have been introduced into the fire service market, allowing firefighters to virtually “see” through smoke.

TICs were originally used by the military, with law enforcement special operations units being among the first to adopt them for civilian applications. As TIC technology evolved, the fire service began to embrace it for use during interior structural firefighting. Today, TICs are available for firefighting use in both handheld and helmet-mounted units. (Goggles are also available, but for obvious reasons, they’re not typically usable for interior firefighting.) Commercial and industrial facilities have also found thermal imaging equipment to be very useful for checking on overheating of equipment and electrical wiring.

The Issue of Cost
It wasn’t that long ago that TICs were extremely expensive. The few departments that had them were at times being special-called long distances so other departments could use them. The cost of technology remains a major concern for administrators, because it can delay or prevent departments from placing new, ground-breaking equipment in field operations. Although TICs are still relatively costly today, prices have come down a bit, and thanks to a variety of grant programs, they are much more accessible to most fire companies.

How TICs Work
TICs can detect, or “see,” emitted heat energy through a variety of filters, including smoke and dust. They can also detect energy emitted through a door or wall, which indicates that they’re hot and that there’s most likely a lot of heat on the other side of the door or wall. Further, TICs can detect energy reflected off of water or mirrors, even though the heat may not actually be coming from those points. Important: Although they’re called “cameras,” fire service TICs only detect differences in heat signatures. Looking through a TIC isn’t the same as viewing an object in normal light. Details of objects detected on camera may not be clearly visible, and there may be variations in depth perception, similar to the passenger side mirror on your car.

TIC Pros & Cons
There are several pros and cons to the different types of TICs. Hand-held TICs are portable and can easily be shared among several crew members. A firefighter who needs to exit the hazard zone can simply pass the unit to another firefighter who might be replacing him in that area. Any controls on the unit are at the firefighter’s fingertips; however, as the name implies, the hand-held unit requires a hand to hold it, which can slow firefighting operations.

The helmet-mounted camera allows firefighters to keep both hands free, which eliminates the issue of slow operations, but it’s strapped to the firefighter wearing it, so as soon as they leave the area, the (expensive) camera goes with them. Some helmet-mounted cameras can be removed from one helmet and attached to another, but it does take a bit of time to accomplish this.

There are also thermal imaging goggles, which can be used for search or other exterior operations, but they’re not currently made to interface with SCBA masks and generally aren’t designed for firefighting environments.

TIC Applications
TICs have many different uses on the fireground. Here are just some of the ways in which firefighters can use them to their advantage:

TICs are also key during initial attack. Although incidents with “fire showing” can be relatively obvious as to where to make the fire attack, it may not be as obvious as you think.  A fire on a lower floor may be spreading into the attic—a general sweep of the fire building with a TIC can quickly reveal this.  And if there’s only smoke showing from a fire building, a TIC can help pinpoint the seat of the fire, allowing initial attack to be more effective.

TIC Caveat
I’ve chatted with a number of firefighter friends who have decades of experience, to get their perspectives on how firefighters use TICs in their everyday jobs. They emphasize (and I agree!) that although TICs provide very valuable information to crews on the fireground and can be a lifesaving resource, they are just another tool in our toolbox—meaning they can’t and shouldn’t completely replace a firefighter’s senses. Firefighters must be trained to use their own eyes and ears to look for signs, such as increasing heat and warnings of structural failure, that a fire is becoming more dangerous. TICs should be used as a tool that can aid a firefighter’s already well-trained senses.

Important: Different TICs may also have different limitations once inside the fire building. These limitations must be tested during training exercises before putting firefighters on the live fireground.

Conclusion
Like all electronic equipment, TICs are becoming smaller, lighter and less expensive, which makes them more accessible to emergency services organizations. And they’ve proven their worth over and over again on the fireground and beyond. In several of its investigations, NIOSH has recognized that the lack of a TIC contributed to the firefighter injury/fatality in question. The post-incident assessment and review team for the Charleston Sofa Super Store Fire recommended that each engine and ladder company be equipped with a TIC.