On Wednesday, the Joongang Ilbo newspaper reported that infrared security operations by South Korean and U.S intelligence agencies led to the discovery of a possible new nuclear facility in North Korea.  The new operations are reported to be taking place at the Yongbyon nuclear power plant, the location of the country’s only previous plutonium generating reactor. The report states that officials had used an infrared security camera to pick up heat signatures from centrifuges operating inside the facility.  Construction for the plant that’s said to be 120 meters long by 15 meters wide began back in 2012, and has now began production with about 2,000 centrifuges according to the official handling the North Korean intelligence, who was not named. That, coupled with the 2,000 centrifuges already in use at the Yongbyon facility (which were shown to US scientists in 2010) can add up to a substantial amount of enriched uranium.

A nuclear engineer (who wished to remain anonymous in the article) stated, “If the North operates all 4,000 centrifuges year-round, it can produce about 80 kilograms (176 pounds) of highly enriched uranium annually.  That is enough to build four to five nuclear bombs.” 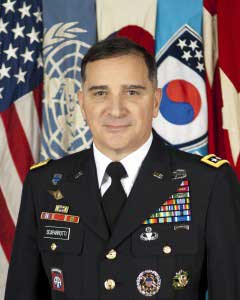 In order for nuclear missiles to be launched from such a vessel, they would have to “miniaturize” the warheads to create a nuclear tipped weapon.  The atomic warhead would have to be smaller than 90 cm in diameter and less than one ton in weight.

“As a commander, I’ve got to assume they have that capability,” said General Mike Scaparrotti, commander of U.S. Forces Korea and the Republic of Korea-U.S. Combined Forces Command,  “Personally, I think that they certainly have had the expertise in the past.  They’ve had the right connections, and so I believe have the capability to have miniaturized a device at this point, and they have the technology to potentially actually deliver what they say they have.” However, he went on to say, “the probability of its being effective pretty darn low,” due to inadequate testing.

But that doesn’t mean we should ignore what they are doing.  The South Korean government believes that the North has been testing detonation methods sine the 1990s, and suspect they are getting close to a final product.  According to the Korean article, “Concerns are also high because highly enriched uranium weapons can be produced without explosion tests.”  They are referring to a warhead known as “Little Boy,” the kind of bomb the United States dropped in Hiroshima in 1945.  And since it takes anywhere from 2 to 7 years for a country to successfully miniaturize a warhead (according to the experts in Washington) we should assume they are a fully nuclearized state.