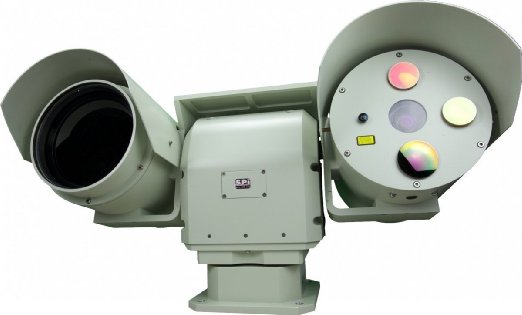 Cooled versus uncooled thermal cameras for long-range surveillance Whether securing a country’s borders, or the fence line of a large industrial facility, in daylight, low-light and total darkness, thermal security cameras are the perfect solution. There are many cooled and uncooled thermal camera systems available for these applications. This technical note describes these two classes of long-range thermal camera systems, and explains the costs and benefits associated with each. Cooled thermal security cameras A cooled thermal camera’s imaging sensor is integrated with a cryocooler. The cryocooler lowers t sensor temperature to cryogenic temperatures. This drop in sensor temperature is necessary to lessen thermally induced noise to a level below that of the signal from the scene being imaged,  mechanical tolerances that wear out over time, as well of use. cooled thermal cameras are more sensitive to small differences in is uncooled thermal imaging ca cryogenic cooling. Changes in scene temperature cause changes in the MWIR Cryocoolers have moving parts made to close as helium gas that slowly works its way past gas seals. Therefore, cryocoolers need to be rebuilt after 8,000-10,000 hours Night and day, in good weather and bad, hiding from a thermal security camera is no easy task. A Cryocooler C scene temperature than are uncooled cameras, making cooled cameras more suitable for extremely long-range imaging in low contrast scenes. The higher the thermal contrast, the easier it to detect targets against a background that may not be much colder or hotter than the target. Uncooled infrared cameras do not use common detector design is based on the microbolometer, a tiny Vanadium Oxide resistor with a large temperature coefficient on a silicon element with large surface area, l heat capacity and good thermal isolation. C bolometer temperature. The bolometer then converts t inputs to electrical signals and processes them into an image. Uncooled sensors typically work in the Longwave infrared (LWIR) band of 7 to 14 microns, where terrestrial temperature targets emit most of their infrared energy.

Uncooled cameras are generally much less expensive than are their counterparts, cooled infrared cameras. The sensors can be manufactured in fewer steps with higher yields relative to cooled sensors, less expensive vacuum packaging, and uncooled cameras do not require cryocoolers, which are very costly devices. Uncooled cameras have fewer moving parts and tend to have much longer service lives than cooled cameras und similar operating conditions. Security applications often require continuous camera operations. A cooled camera would require service after 1-2 years of such operation; an uncooled camera could work uninterrupted for years. Cooled or uncooled? What to choose? Cameras in mind, it begs the question: why use cooled gives the emphasis on the word “systems” – the camera is only one component of an imaging Why are lenses so much more expensive for uncooled systems at long focal lengths? s the he f/number of an optical system is the ratio of the focal length of the lens to the diameter of s the focal length of a lens is increased, the nt. at contrast, a cooled camera system can be out The M7 PTZ MWIR is an example of a thermal imaging camera with cooled Indium Antimonide (InSb) detector C With all of the advantages of uncooled ca cameras? The answer: when standoff ranges reach 5km or greater, cooled thermal cameras systems quickly become more cost-effective. N “system”. One of the biggest cost drivers of a long-range uncooled camera system is the lens. As effective range requirements increase, the lenses for uncooled camera systems become so bulky and expensive that it can often be cheaper to specify a cooled camera with an equivalent focal length lens. W It has to do with another crucial lens parameter, the f/number. The f/number determine light gathering power of the lens and therefore affects the sensitivity of the camera system. T the front lens element. An f/2 lens with a 500mm focal length must therefore have a 250mm diameter front lens element. That front lens element is very expensive and approaches the limits of manufacturability for germanium, due in part to the difficulty of making a large enough optics grade blank out of raw germanium material. A diameter of the front lens element must be increased to keep the system f/ number constant An uncooled camera must run at a low f/number to have sensitivity comparable to th of a cooled camera. Higher f/numbers reduce uncooled camera sensitivity. In operated at f/numbers of f/4 and higher with significantly compromising system sensitivity. This is because the exposure time or integration time of a

Cooled camera is a parameter that can be increased to make up for reduced light throughput. Uncooled cameras do not have this flexibility. Conclusion: Long-range thermal surveillance applications require long focal length lenses. The cost of lenses increases rapidly with focal length for uncooled camera systems and rather slowly for cooled systems. As a result, even though the cost of a cooled camera core is much higher than an uncooled core, the system cost (core plus lens) for uncooled surpasses cooled system cost at a focal length on the order of 350mm. Useful imaging of man-sized targets at long ranges requires focal lengths that exceed 350mm. Therefore, long-range imaging of man-sized targets is less expensive with a cooled camera system, at least when only considering system acquisition cost. It is important to take the 10,000 – 20,000 hour lifetime of cryocoolers into account when trying to arrive at the best solution. If the cryocooler needs a servicing every 2 years, and the cost is 10% of the total system, then the 4-year cost of the cooled system is really 1.2X the initial system cost. Having more than 50 years of experience with thermal imaging cameras, and producing both cooled and uncooled systems, SPI can always provide you with the necessary information to make a well-informed decision for your particular application.

Cryocoolers have moving parts made to extremely close mechanical tolerances that wear out over time, as well as helium gas that slowly works its way past gas seals. Eventually a rebuild for the cryocooler is required after 10,000-13,000 hours of operation.

Advantages of uncooled cameras beg the question: When better to use cooled thermal imaging cameras for R&D applications?

The answer is: it depends on the application.

If you want to see the minute temperature differences, need the best image quality, have fast / high speed applications, if you need to see the thermal profile or measure the temperature of a very small target, if you want to visualize thermal phenomena in a very specific part of the electromagnetic spectrum, or if you want to synchronize your thermal imaging camera with other measuring devices… a cooled thermal imaging camera is the instrument of choice.

These IR images compare the capture results of a tire rotating at 20mph. The one of the left was taken with a cooled thermal imaging camera. One would think the tire is not spinning, but this is the result of a very fast capture rate of the cooled camera that has stopped the motion of the tire. The uncooled camera capture rate is simply too slow to capture the rotating tire causing the wheel spokes to appear transparent.

Cooled Thermal Camera Image of Handprint on Wall – After 2 minutes

Uncooled Thermal Camera Image of Handprint on Wall – After 2 Minutes

One of the great advantages of cooled thermal cameras is the ability to easily perform spectral filtering in order to uncover details and take measurements that otherwise would be unachievable with uncooled thermal cameras. In the first example shown here, we are using a spectral filter, either placed in a filter holder behind the lens or built into the dewar detector assembly, in order to image through flame. The end user wanted to measure and characterize the combustion of coal particles within a flame. Using a “see through flame” spectral infared filter, we filtered the cooled camera to a spectral waveband where the flame was transmissive and therefore were able to image the coal particle combustion. The first video is without the flame filter and all we see is the flame itself. The second is with the flame filter and we can clearly see the combustion of coal particles.