What is Thermal Imaging?

What is Thermal Imaging?  Thermal imaging, or thermography, is the detection and measuring of radiation in the infrared spectrum being emitted from an object with the use of thermographic cameras. These infrared imaging systems produce thermal video or still images (thermograms) using color differences to point out the various temperature points of an object from hot to cold levels.  Since the amount of radiation increases with higher temperatures, warm spots will stand out from colder spots on the thermal image. And being thermal imaging cameras do not need light to operate, they can detect  objects in total darkness or in daylight. 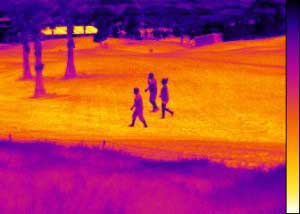 Thermal imaging can detect people hundreds of yards away in the darkness, making it a vital tool for military & law enforcement agencies.

There are typically two types of thermal imaging systems; cooled and uncooled.  Cooled thermal imaging sensors (such as BST sensors) feature the best resolution and operability of the two types of thermal sensors.  They can read differences as small as .2 F from more than 1,000 feet away.  The only drawbacks of this type of sensor are that they are very expensive and do not stand up well to being bumped around.  The uncooled thermal imaging sensors (microbolometers), on the other hand don’t have quite the sensitivity of cooled models but they are very inexpensive in comparison and rugged enough to withstand heavy use. They operate at room temperature, so they do not need to have the extra cryogenic cooling systems BST sensors require. However, over the years with cost and size being an issue, microbolometers are fast becoming the most commonly used types of thermal imaging systems.

Infrared cameras with BST cooled sensors (like the Palm IR 250-D, for instance) are a bit larger than that of an infrared cameras with uncooled microbolometer sensors (like the RAZ-IR Pro). However, the BST thermal sensors have such a varying degree of thermal sensitivity, you can look directly at the sun and then to a snow pile and never lose the image.  Whereas the microbolometers cannot handle such a large transition at all and could be damaged from such an attempt.

This article is a short and general description of the basic concept of thermal imaging.  For more information or to see what thermal imaging systems SPI Corp has that can work for you please call Jim Santana at (702) 369-3966 in the Las Vegas area, or toll free at (800) 403-2983.