Since the shooting of Michael Brown back on August 9, military surplus has been funneling to several police departments around Ferguson, MO from the Defense Department. The gear includes rifles, a Humvee and law enforcement infrared equipment (including laser sights and infrared illuminators to work with night vision systems). The largest portion of the equipment, however, includes laptop computers, printers and cold weather overalls. Though the Defense Department has stated that none of the equipment has been sent to the city of Ferguson itself, many are raising eyebrows over the program since Brown’s shooting, stating police escalation would only exacerbate any violence that may occur following the awaited grand jury decision on the Brown case. Despite the criticism over the program, officials say it generally takes several months or even years to get surplus orders filled, and it is highly “unlikely” that the arrival of the equipment has anything to do with the recent protest activity.  According to Lt. Christopher Clay of the Wellston Police Department, he stated that the equipment was, “requested long before the Ferguson protests and isn’t meant to counter protests or riots.”

Regardless, tensions have been so high that on Monday, Governor Jay Dixon activated the National Guard to assist police officers if conditions spiral out of control.  Schools have been closed for the entire week of Thanksgiving, anticipating the ruling to be soon. And over the past two nights, protesters flooded the streets, with eight people being arrested so far. According to VICE news, many business owners are hiring private military contractors to transport high value items such as gold & firearms to secure locations should riots again erupt and looters swarm their shops. Noting, “A private military contractor who spoke to VICE News on condition of anonymity said that more than 300 private military contractors, or PMCs, have been contracted for work in direct response to Ferguson security concerns.” 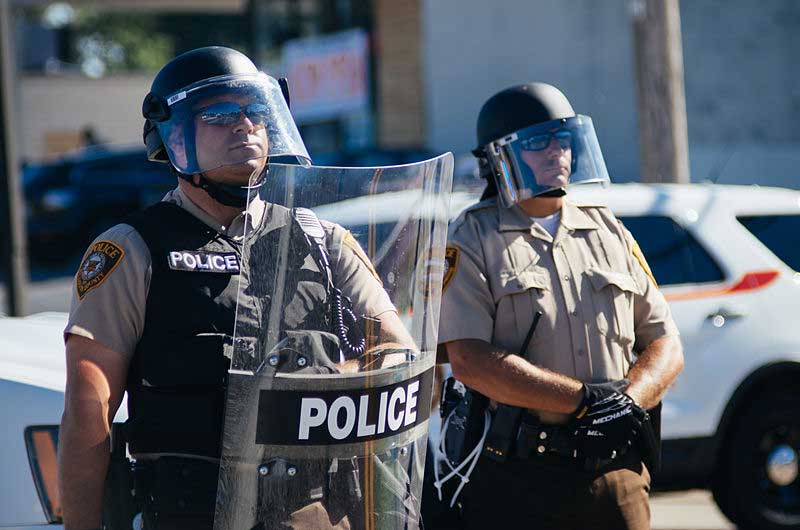 After weeks of pow-wows between local officials and protestors in an effort to quell the anticipated storm, city officials established “rules of conduct” for interaction between law enforcement and locals. “We have been criticized by some for sitting down with the protest leaders. The protest’s leaders have been criticized for sitting down with us,” said St. Louis Mayor Francis Slay. “We did so because in similar situations in other cities, things ended up very, very badly.” He went on to add, “We believe that it would be imprudent not to plan for protests no matter what that decision might be.”

The agreement calls for police priority to first be saving lives in case violence erupts.  Clear “lines of communication” would also be established between protestors and police, and police would use a minimum amount of equipment.  The police, however, made no promise to avoid using tear gas, an often effective means of crowd dispersal.

You can read Mayor Slay’s announcement HERE describing the “rules of engagement” officials are to follow in the event of protests turning violent.

SPI Corp offers several solutions for police operations for maximum crowd management & situational awareness.  Our law enforcement infrared equipment comes in handheld and mountable models, not requiring use of infrared illuminators (such as the police near Ferguson, MO need to use with their night vision equipment). We offer true thermal imaging solutions which do not require a light source to operate.  Since they visually measure heat, the picture is complete and crisp, real time, and most of all accurate.

Please visit our catalog of law enforcement infrared equipment to see which solutions we offer.