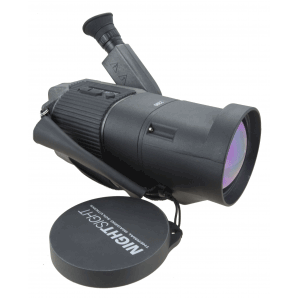 The Thermal-EYE 250D (aka Palm IR 250D) thermal camera is the latest version of the most popular infrared camera of all time. The D is the digital model packed with new features.
CALL TODAY for pricing! (702) 369-3966.

Thermal-Eye 250D Used Thermal Imaging Systems
The 250 series of used thermal imaging systems is the longest running infrared camera of all time. The 250’s are based on the BST thermal imaging sensor that is widely respected for its high contrast detailed imaging and ultra wide dynamic range. The BST sensor boasts a dynamic range that is superior to event the so called “latest and greatest” of thermal imagers on the market. While the 250 models are larger than today’s ultra compact models, they still produce an image that many consider superior to the little guys. It would seem that all the

effort has been put into making infrared cameras smaller and lighter but not necessarily better at imaging. The 250D is the latest model ever made for the 250 series. The D stands for digital. The THERMAL-EYE 250D features an advanced digital zoom. It also sports an upgrade Digital Signal Processing (DSP) core and allows you to manipulate edge sharpness, noise reduction and store user settings. The 250D used thermal imaging systems come standard with a 75mm 12° X 9° Germanium lens that gives you an estimated Human Detection Range of up to 3000′. Optional lenses are available including 25mm, 50mm, 100mm (motor focus) and 150mm (motor focus). The 250D is an exceptional imaging performer and is still suited to a wide range of image critical applications.

WIDE DYNAMIC RANGE
The BST thermal imaging sensor is widely regarded as one of the finest ever produced. Known as the “Gold Standard” in imaging performance, no other sensor can match its detailed dynamic range imaging.

DIGITAL ZOOM
ZOOM IN with advanced DSP based digital zoom technology that increases your situational awareness.

SITUATION: State Troopers were called in by the local Sheriffs Department to assist in the apprehension of an 18-year-old subject who fled the scene of a fight at a residence in early February. The scene began as the deputy arrived around 8pm and the teenage suspect fled in a vehicle. The deputy quickly followed, but the suspect disappeared off the side of the road on foot.

NEED: The deputy and his team lost the subject in the chase. A canine unit was immediately called into assist in locating the suspect, who was wearing only jeans and a t-shirt on this extremely cold winter night. After the canine was unsuccessful in locating any sign of the suspect, the deputy decided to call in the State Troopers, remembering they had access to a thermal imaging camera.

SOLUTION: Two State Troopers arrived on scene, with their Thermal-Eye 250D thermal imaging camera in hand. They were briefed on the situation and surveyed the scene. The troopers immediately began scanning the area for any sign of heat radiating from a person or object in the cold night. As they approached a ditch further down the road, they spotted something ‘glowing’ in the camera display. It was definitely an animal or a person hiding in the ditch, based on the amount of heat being radiated. The Troopers approached slowly and realized it was in fact the suspect hiding in the ditch. His body heat had given him away and the contrast was even more apparent against the background of the cold ground. The Deputy took the suspect into custody. He showed signs of hypothermia due to exposure to the cold; especially given he had no shoes on and had fled on foot. The suspect was then arrested for OWI.

RESULTS/BENEFITS: A repeat troublemaker was arrested and taken into custody. Troopers successfully identified the suspect without having to endanger themselves in a ‘blind’ search. Thermal imaging allowed them to survey the area from a distance. Law enforcement apprehended the suspect quickly, which allowed him to be successfully treated for signs of hypothermia. Had they not found him quickly, he could have experienced severe health problems and injury. The search was successful and was completed in about half the amount of time than an average search without thermal.

The local county sheriff’s department received a call on a suspicious vehicle in the area. En route to investigate, they received a second call on the radio reporting a stolen vehicle in the same vicinity. Both vehicles fit the same description. Officers continued down the road to check out the ‘suspicious vehicle’ to see if it was in fact the car that was reported stolen.

NEED: The suspicious vehicle was last reported driving into a heavily wooded area in a remote part of the county. The officers dealt with calls in such areas quite often and had identified a need to be able to see suspects, missing persons and other objects in wooded areas thick with trees and brush, especially at night. Without thermal imaging cameras, it was common for officers to walk right by a suspect hiding in a bush just inches away. The officers realized a need to “See the Unseen”.

SOLUTION: The county invested in a number of Thermal-Eye 250D handheld thermal imaging cameras. The officers realized this suspicious vehicle scenario would be a great opportunity to utilize their new cameras. Upon approaching the area, the officers immediately spotted the vehicle in question, which was in fact the same truck reported stolen. But no one was in sight. The officers took the Thermal-Eye 250D and began scanning the wooded area for signs of someone, especially considering they could hear some people or noise off in the distance. The officers followed the loud noise while continuing to scan with the camera. Suddenly they noticed a hotspot off of the trail and located a male laying face down in the woods, dressed in all black. They immediately took him into custody and he was later prosecuted for the vehicle theft. Another deputy had just walked by and was within a foot of the suspect, but hadn’t noticed him without the camera. Only with the help of the thermal imaging unit were they able to detect him. The suspect turned out to be one of the county’s most wanted. The officers had succeeded in locating the stolen vehicle as well as the criminal, but they still could hear some loud noises off in the distance, so they decided to investigate. Using the thermal imager, the officers determined that the noise was coming from a large group of teenagers off in the woods. The officers were able to creep up unnoticed and make two narcotics arrests at the party. It ended up being a very successful night for the department with two big busts in one night. 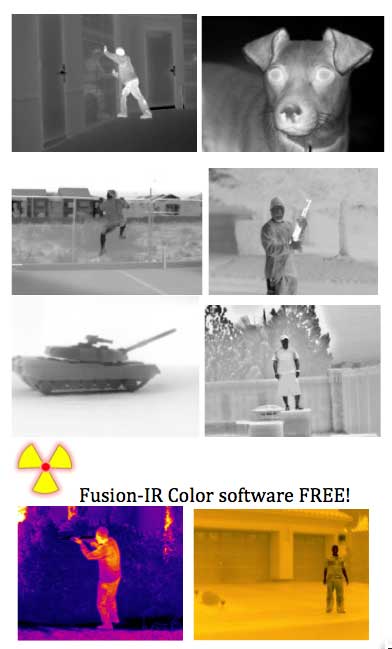 RESULTS/BENEFITS: One of the county’s most wanted criminals was taken off the streets and prosecuted to the full extent of the law. Two narcotics arrests were also made thanks to the use of thermal vision. Officers were able to scan the highly dense scene, thick with brush, from a safe distance before approaching. Officers were able to detect both the criminal and the party without being noticed, since the thermal camera does not give off any light. Due to their ‘stealth mode’ approach, the risk to the officers’ safety was decreased. Officers were able to locate offenders in the complete darkness,in a heavily wooded area.

SITUATION: The prevalence of indoor marijuana growing operations continues to be a challenge for local and federal law enforcement in the United States. Marijuana is easily grown in all areas in homes, barns and other buildings using high intensity grow lights. In early spring, 2003, police in Central Oregon focused in on a possible marijuana growing operation after receiving information. A plan was put in place to conduct surveillance of the location and gather probable cause before completing the investigation and closing down the suspected grow operation.

NEED: In Central Oregon, the police deal with an abundance of marijuana grow houses since they are located in a remote part of Oregon. The department frequently conducts surveillance and monitors suspected grow houses, but they needed a way to improve their operations. Since high intensity lights are always used in indoor growing operations, the police wanted to find a way to see the heat being vented from a suspected grow house. Officers needed to “see the unseen” without entering private property. 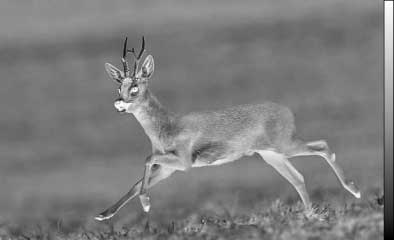 SOLUTION: Armed with a required Federal Search Warrant, which had been obtained based on acquired probable cause, a Certified Law Enforcement Thermographer used the passive, non-intrusive heat detecting thermal imager to view the target building. Using a Thermal-Eye 250D, officers recorded video footage of the target location. Officers then located and recorded video footage of similar structures of the same material and size to the suspected structure, for temperature comparisons. Officers then returned to the target location and after reviewing the comparison footage, easily identified heat anomalies where venting was occurring at a certain time. The venting was unique to the suspected structure alone. The target structure was emitting unusual amounts of heat created by grow lights used for indoor cultivation of marijuana plants. Although the building was well insulated, the Thermal-Eye 250D handheld thermal imaging camera helped officers identify sources of venting from the structure to add to the probable cause already established by other forms of evidence such as high electricity bills. With a required search warrant in hand, officers then moved in and discovered over 2500 marijuana plants, 24 weapons, cash and 25 lbs of dried marijuana ready to be marketed. Officers then utilized the Thermal-Eye 250D to survey the interior of the grow-house to locate money and other drugs at the scene, hidden in the walls. Evidence and other illegal items can be hidden in walls, floors and ceilings not visible with the human eye. The thermal imager can see abnormalities in the surface temperature of the wall, floors and ceilings, identifying possible hidden compartments or even other ‘disturbed surfaces’ such as items buried in the ground.

RESULTS/BENEFITS: The drugs were confiscated before having a chance to make it to the streets and into the hands of children or teens. Defendants were prosecuted and are now serving time. The property was seized and funds from the seizure were distributed to federal and local law enforcement, through equitable sharing. The ill-gotten gains obtained by the criminals are then utilized for new equipment or technology purchases, such as thermal imaging cameras. Officers were able to safely identify the grow house without infringing on the right to privacy and following the letter of the law. 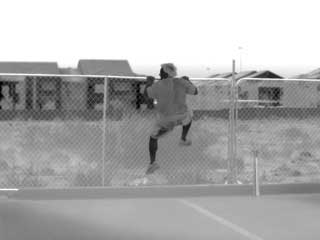