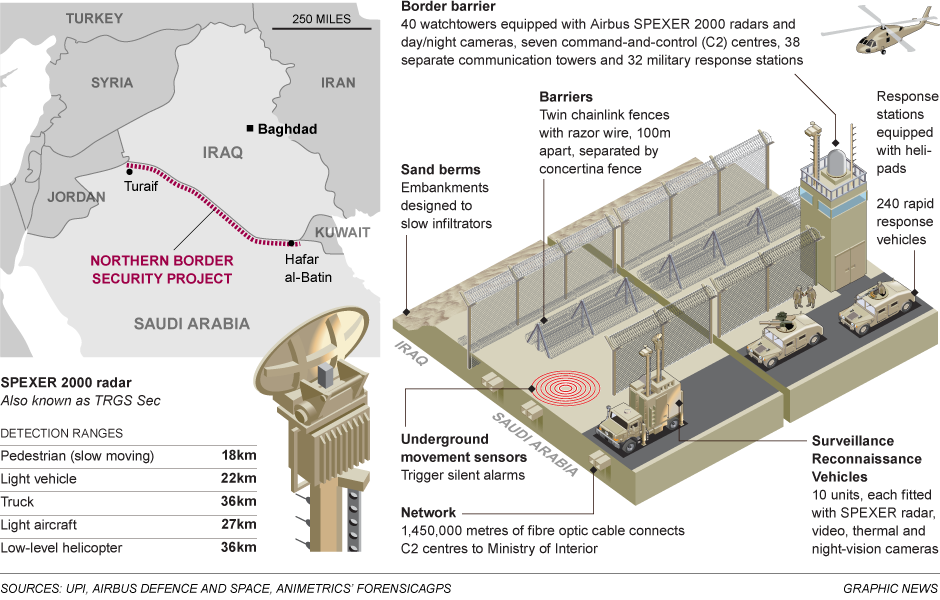 Saudi’s border security fence with thermal imaging will be fortified with concertina wire, shown here. But how effective is a border fence on homegrown terrorists?

Last September, Saudi Arabia began construction of its “Northern Border Security Project” amid a slew of “border attacks” from ISIS militants, including one two weeks ago in which a Saudi general in charge of border security was killed by a suicide bomber.  Saudi Arabia has become a target for ISIS since supporting US air strikes in Iraq and Syria, and even more of a target for their strategic oil fields and holy sites including Mecca.  So far, there have been four attacks inside the Saudi kingdom in the past six months, resulting in the “deaths of eight civilians, 11 police or border guards and 13 militants, according to Saudi officials,” the Washington Post reported.  According to Trade Arabia, the security fence with thermal imaging cameras will stretch about 600 miles (965 km), will be five layers deep and will be topped with razor wire.  The layers will be 100 meters apart with concertina wire strewn in between.  They are also reportedly considering constructing a similar fence along its south border with Yemen.

This security fence with thermal imaging cameras is augmented by 40 watchtowers, under ground sensors with alarms, night vision & radar, which will communicate via fiber optic lines to 38 communications towers and the Ministry of the Interior at Riyadh of any potential threats.  All this will be commanding a 240 armored vehicle & helicopter response force.

Will A Security Fence with Thermal Imaging Deter Homegrown Terrorists?

But will a security fence with thermal imaging cameras & first response force eliminate an even larger issue for the Saudis?   Much like the terror attack on Charlie Hebdo, these incidents are caused by homegrown terrorists with out of the 293 arrested, 260 being Saudi Nationals. (Washington Post article).   There are also some 2,000 more estimated to have joined the rebel forces from a pool of Saudi citizens.  “They are targeting Saudi Arabia, and they want to have a very big terrorist act in this country,” said Gen. Mansour al-Turki, spokesman for the Interior Ministry.  To make things in the region even more complicated, a new king has ascended the throne after the death of his brother.   King Salman was crowned last Friday to become leader of the Saudi kingdom sandwiched by the chaos of the surrounding Iraq, Syria & Yemeni countries.  He addressed these concerns in his first speech to the people on Friday, saying, “the Arab and Islamic nation is in dire need today to be united and maintain solidarity.”

Consequently, the Saudi Kingdom has come under fire again for its human rights record, notably in the recent sentence of 10 years in prison and 1000 lashes to a blogger for breaking technology laws & insulting Islam.  The blogger, named Raif Badawi has so far received 50 of his punishment lashings, but they were postponed as doctors deemed him unfit to withstand anymore punishment after public outcry from leaders and Amnesty International.  Recently, President Obama cut short his trip to India to pay respects to the late King Abdullah and show support for his successor.  But in regards to the torture of Badawi, he noted it was “unlikely” he’d be discussing it with the new king.

In other news, The First Lady caused quite a stir when she arrived for the Saudi meetings without a head covering.  Saudi Arabia is one of the few countries in the world who are required to cover their heads.   The Washington Post reports 1,500 tweets criticizing her for the action.   Though the Saudis tend to make an exception for foreigners, many noted she has worn head scarves in other Muslim nations, so why not Saudi Arabia?