According to a recent study published in the American College of Allergy, Asthma & Immunology by Drs. Jihyun Kim and Kangmo Ahn, water damage detected by infrared cameras in homes shared a direct link with causing or aggravating AD or Atopic Dermatitis (commonly known as eczema) in children. Eczema is a highly irritating skin condition that frequently manifests in children, often during their first year of life.  According to Dr. Ahn, “In this study, we wanted to examine the association between AD severity and water damage by using a reliable method.”  He added,  “Infrared cameras can be helpful to assess water damage in that situation, because they’re more reliable.” Water damage has long been associated with respiratory illnesses such as asthma, but no conclusive studies have shown the link between moisture or mold presence on allergic conditions such as AD, until now. 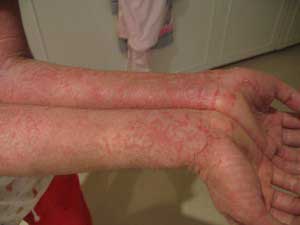 In the study, Dr. Ahn conducted thermal building inspections of 52 homes with children who have AD. Their severity was classified as mild, moderate or severe based on a scale called Scoring Atopic Dermatitis (SCORAD). Of those 52 homes, water damage was found to be prevalent in 31 of them. (The term ‘water damage’ meaning more than two square feet of damage caused by water). They also discovered higher concentrations of airborne mold in these homes. After the study, Dr. Ahn estimated that children living in these water damaged homes which were examined by infrared cameras were 15 times more likely to have moderate to severe eczema instead of mild cases. Though they could not conclude whether the escalation of symptoms was caused directly by mold, or simply by the moisture drawing more dust mites to the environment.

In an interview with Reuters Health, Dr. David Rosenstreich from the Division of Allergy and Immunology at Montefiore Medical Center in Bronx, NY, stated his opinion on the study, “dust mites need moisture to grow. If the house is moist, you have more dust mites, and dust mites are a risk factor for allergic children with Atopic Dermatitis.” He also went on to say, “It’s very intriguing and some of that makes sense but it probably needs to be confirmed,” noting that taking infrared measurements of the houses on different days may have resulted in differing mold counts. He also remarked he was intrigued by the study, but was surprised there was such a strong link with infrared-detected water damage and eczema, but not with the visible mold growth.

Further, in the study’s conclusion, Ahn notes, “Water-damaged homes affect the severity of AD in children. Infrared camera-driven assessment is a promising tool for determining moisture problems in buildings.” 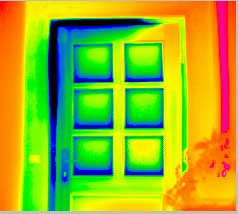 A thermogram from a home inspection highlighting air leaks in a doorway. Thermal building inspections can save money on heating & cooling bills.

Whether you are a first time home buyer or a seasoned veteran, you always want to make sure whatever building you purchase is suitable for a residence.  Thermal imaging cameras are used to conduct infrared surveys inside and outside of the home to detect potential issues with the property.  During an indoor inspection, for instance, a thermographer can use infrared imaging scans to detect areas of moisture around pipes or in ceilings.   Though the naked eye may not see the moisture, the wetness will leave a colder signature (or hotter, depending on what is leaking) than the areas around it, making it stand out on the thermogram produced indicating the issue to be addressed.

Indoor inspections are the most common thermal building inspections because there are relatively no outside factors such as wind and other variables that can disrupt the thermal reading, whereas outdoor inspections can show you an overall picture of the areas of the building that may need to be looked at. Thermal building inspections are recommended for anyone before purchasing a property to ensure you are well aware or any current issues and just how much it will cost to repair them.  Basically, a few hundred dollars cost for an inspection can end up saving you thousands in the long run before you take a dive into a money pit.

Thermal building inspections can detect a wide array of issues, such as:

For more information on thermal imaging cameras to conduct home inspections, call Jim Santana at (702) 369-3966 or email us at sales@x20.org. We’ll he happy to assist you!