Thermal imaging cameras are now being used as a safety precaution to prevent the spread of the deadly Ebola virus since the recent surge of sickness plaguing West Africa. With many lives hanging in the balance and no cure, many international airports are employing thermography to detect the fatal illness in security screening. Though the risk of contracting Ebola simply by riding on an airplane is very low, many airlines are taking certain precautions, even canceling routes through the Ebola riddled countries. But for those keeping their routes, thermal imaging cameras are offering a non-invasive and cost-effective means of detection. 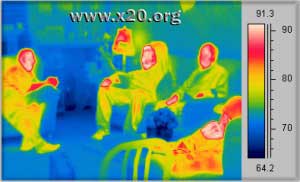 Thermal imaging cameras measure the heat emanating of people. People with abnormally high temperatures could be quarantined at airports during the Ebola epidemic to prevent the spread of the deadly disease.

Since thermal imaging cameras are used to identify and measure the amount of heat an object produces, they are directly being used for fever screening in humans. Airports are segregating passengers with abnormally high temperature readings and quarantining them for medical exam. But infrared science is not full proof for detecting Ebola, though it is quite helpful. In many cases, Ebola symptoms do not manifest for up to three weeks. And though a person may be suffering for a fever, thermal imaging cannot determine the cause of the fever. Also, passengers who may be experiencing symptoms could have taken fever-reducing medicine and get past thermal screening. (Though with Ebola, fever medicines that usually last up to 12 hours last maybe a few).

After a patient is quarantined from a thermal imaging scan, their blood must be tested for a proper diagnosis. Doctors may use a PCR test,  (polymerase chain reaction), which can take up to eight hours to get results. But in the field, color changing strips can diagnose Ebola in as little as 15 minutes. Regardless, having to subject airplane passengers to blood tests before boarding flights brings up too many red flags in the legal sense. It would also be quite costly, so thermal imaging cameras seem to be the best preventative means at the moment. 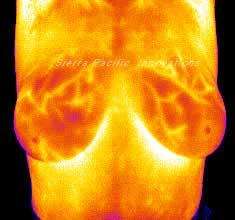 Breast thermography can detect high vascular activity in tissue that is abnormal and a marker for cancerous cells.

Thermal imaging cameras have been used for years in the medical and veterinary field for exposing and treating symptoms. And though infrared scans cannot be used to directly for a total medical diagnosis, they often spot issues in early stages by symptoms such as fever and high metabolic rate.  For instance, early stages of breast cancer can be detected due to the pre-cancerous tissue in the breast having a higher vascular activity than the healthy breast tissue.  And in the case of breast cancer, early detection can save your life.

According to William Hobbins, M.D., F.A.C.S., “An abnormal breast thermogram is the highest known risk marker for the presence of or future development of breast cancer.”

You can read more about what he and other doctors are saying about the benefits of breast thermography here.

Click the links below for official notices from the CDC and WHO on the current Ebola threat in West Africa.

CDC Traveler’s Heath Notice (Includes information on Ebola, how it is transmitted, & other information)