Thermal imaging for law enforcement has become a necessary tool when it comes to protecting and serving the people. It’s technology in action, giving a new set of eyes to pick up on things we would not normally be able to see, and even see things in the dark without aid of light. Being able to see in infrared heat signatures enables law enforcement officers to conduct surveillance without being seen, find things that we usually cannot see and offers a greater safety to them overall when they are on the job.

Thermal imaging for law enforcement detects an armed suspect in hiding that can potentially be a threat to police officers. Having the ability to see hidden dangers provides a huge advantage to law enforcement officers on duty.

Most notably, thermal imaging systems provide a measure of safety in nighttime situations dealing with complaint calls, and when entering unfamiliar buildings.  Often times, officers are called to investigate an assault or a domestic dispute in the darkness of night.  They are at a serious disadvantage when they have to secure a property that is foreign to them. Having a thermal imaging device can identify the heat of persons hiding behind trees or in the shadows, making it safer for them to anticipate a possible ambush.  They can detect suspects hiding in closets or behind furniture. They can also spot aggressive dogs that may be a hindrance to their operation so they can safely secure them out of the way. Infrared cameras can even detect the heat signature of a weapon discarded by a criminal during a chase, as heat from the criminal’s hand will leave a trace on the grip for a time. 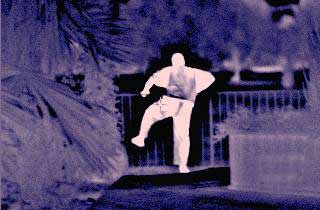 Thermal imaging cameras can spot fleeing suspects past the range of police flashlights in total darkness.

Thermal imagers also help law enforcement detect hidden objects in a way they were not able to before.  Though K9s provide assistance in sniffing out drugs and explosives, infrared cameras are able to monitor temperature changes in areas of objects, allowing law enforcement officers to identify areas that seem abnormal in temperature.  They can detect irregularities such as things taped to a person’s body under their clothes or compartments that should be hollow that are filled with contraband. Thermal imaging for law enforcement paints a clear picture that something isn’t right, and in a non-invasive manner, making it a potent tool when it comes to making decisions to conduct physical searches & seizures.

Search & rescue or recovery operations also benefit greatly from the use of thermal imaging for law enforcement. They can scan large areas in total darkness at once, allowing them to keep time on their side. In cases where hikers have fallen and are unable to speak out, officers & firefighters can detect them from a distance away and rescue them.  Skiers  in avalanche conditions and struggling swimmers can be found much easier, as their body heat will be readily different from the surrounding snow and water. 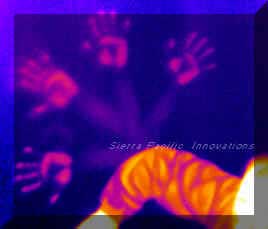 The heat signature of a person can remain on an object after they are no longer touching it for minutes afterward and may help to discover evidence tossed in the bushes from fleeing criminals.

Thermal imagers can also see in conditions where there is light, but lowered visibility from fog, smoke and leafy areas when most unaided eyes have a hard time distinguishing between objects. Thermal imaging cameras often fare better than night vision goggles, for instance, because most night vision systems’ effectiveness can be circumvented by dark clothing or concealment. This is not the case with thermal imagers, as body heat will still be measurable behind fabric or foliage.

We have many thermal imaging options available for law enforcement officers, fire departments and search & rescue.