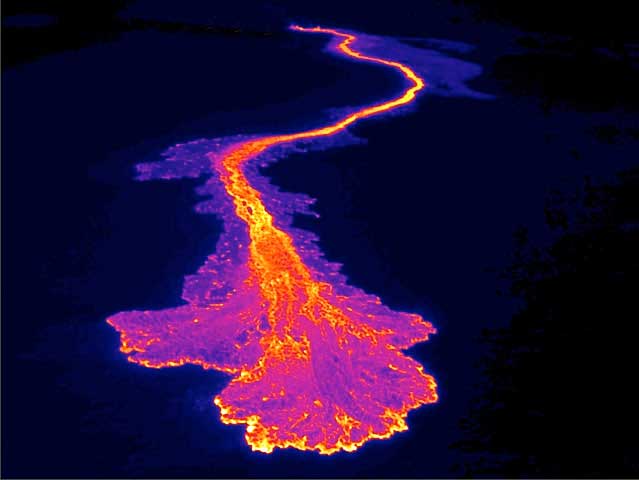 Hawai‘i County Mayor Billy Kenoi has issued a state of emergency on the Big Island of Hawai’i after thermal imaging cameras point to the advancing lava flow on the nearby Ka‘ohe Homesteads, home to more than 8000 residents.  According to Mayor Kenoi’s official press release, “We are taking this step to ensure our residents have time to prepare their families, their pets, and their livestock for a safe and orderly evacuation from Ka‘ohe in the event the flow continues to advance.”  And though no evacuation has been announced yet, access to the Ka’ohe community has been restricted to only residents. Locals are urged to be prepared and have a plan and stay alert for upcoming updates as the situation progresses. And local citizens would do right to prepare quickly, as the Volcano Alert Level has been raised from Watch to Warning. The biggest worry is that the subdivision would become separated from the rest of countryside. There are also Lava Flow Update meetings scheduled for September 9 & 11at 6:30 p.m. (Tuesday and Thursday this week) in the Pahoa High School Cafeteria. 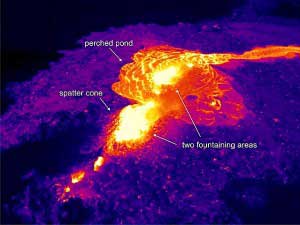 Thermal imaging cameras are proving very useful in detecting where the lava flow is headed when it is not visible due to forestation, cracks and rough terrain.

According to the USGS, this new lava flow has begun spewing back in June, and has been increasingly hard to track due to cover of forest and cracks & depressions in the landscape.  However, the use of thermal imaging cameras has provided them a clear picture as to where the lava flow is headed, and it’s aiming directly for homes.  The lava flow is currently about a mile away from homesteads, and by the speed it is traveling could reach them in the next 5 to 7 days.  Local residents can track the lava’s progress & updates from USGS by visiting the Hawai’ian Volcano Observatory Page from the USGS.

Since thermal imaging cameras measure heat, they provide a huge advantage in monitoring volcanic activity, in that they can see the lava’s heat measurements from above ground where you could not normally see it. The thermal sensors can detect heat signature quite easily, and safely from a distance away as well.  In the above image, an infrared camera from SPI Corp was used on a UAV drone flying over top of the volcano caldera. You can clearly see the areas of flowing lava, heat and coolness, and predict the direction of the flow more accurately than with the naked eye.

Scientists are currently using developments in thermal imaging technology to try to see if they can determine when an eruption will occur in the future, as well.  In the case of volcanoes that erupt on a predictable schedule, such as the Bezymianny volcano in Russia which erupts twice a year like clockwork, scientists were recently able to observe spikes in temperature and predict the next eruption. Read the article on National Geographic here.  Promising studies such as this will no doubt become very useful, as many of our populations today live near active volcanoes.