Thermal security cameras will be garnishing a 700km border “fence” made of ground sensors, radar & other electronic surveillance devices that is going up between the US and Canada, The Ottowa Citizen reported this week. The $92 million project is expected to concentrate on 100 “high risk” areas bordering the US with Ontario & Quebec, and to be completed by 2018.

“The concept involves employing unattended ground sensors, cameras, radar, license plate readers, both covert and overt, to detect suspicious activity in high-risk areas along the border,” said Assistant Commissioner Joe Oliver, RCMP’s head of technical operations. “What we’re hoping to achieve is a reduction in cross-border criminality and enhancement of our national security.”  He also noted that though they currently do have border surveillance technologies in place, they have “nothing in terms of the scale of this project.” The operation is expected to include future interoperability with US border patrol as well,  partnership to be expected in fighting smuggling and international acts of crime. “There are lots of opportunities to look at new ways of doing business. A threat to Canada is a threat to the U.S. and vice versa, so we operate in an environment where we’re trying to address shared threats.” 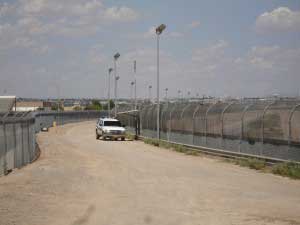 Canada plans to use thermal security cameras as an enhancement to border patrol. The US/Mexico border near El Paso is pictured here.

One of the main smuggling operations currently plaguing the border between Quebec & New York State is tobacco smuggling, which is thought to generate hundreds of millions in illegal profits each year.  In addition, many gangs and mobsters use the exact same route for illegal drug and human trafficking, which also hints at the potential for terrorists to infiltrate the borders at the same areas. Thermal security is imperative in such cases where people, drugs or even weapons may be stashed in hidden compartments that border check points may not detect with the naked eye.

13 years ago, a border patrol agent in Montana only needed to carry a weapon and a pair of binoculars.  Now, a radiation detector, night goggles and thermal imaging are added to their arsenal.  Since 2001, the number of border agents patrolling the remote area between Montana and Alberta has increased from about 340 to 2,200, only highlighting the importance of security at our Northern border. (The border with Mexico is still more highly monitored, with over 18,500 agents now).  Much of the modern equipment being used has been unmanned aircraft fitted with thermal security cameras & video surveillance equipment.

Regardless of where or who, it is estimated that 300,000 people cross the 8,891 km border between Canada and US every day, as well as roughly 8,000 trucks cross at the Windsor-Detroit border alone. The “International Boundary,” as it is called, is the longest international border in the world, with much of it uninhabited,  making UAVs with thermal security cameras a perfect technological solution for monitoring crossing activity.

In 2011, President Obama &Prime Minister Stephen Harper announced the Action Plan on Perimeter Security and Economic Competiveness to focus on four areas of security measures, including addressing threats, trade facilitation,  infrastructure & cyber security, as well as integrated cross-border law enforcement.  And since the recent shooting in Ottawa & other extremist related attacks, the FBI advised amped-up security measures in light of a possible terrorist attack. In addition, at some of our crossings (like the one in Montana) there is little to no staff on hand to monitor the border, which only emphasizes the need for a joint effort between both countries as far as national security is concerned.

SPI Corp specializes in thermal security products, offering both the M1 and M5 lines of thermal security cameras with full pan tilt zoom capability in any weather condition.  Call us today at (702) 369-3966 or (800) 403-2983 for more information, or email us at sales@x20.org.