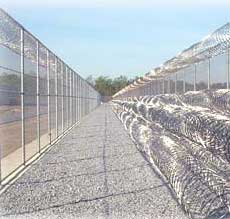 Thermal surveillance cameras will be used from towers to help catch inmates using methods such as UAV drones to smuggle illegal contraband over prison fences.

Inmates at a maximum security South Carolina prison are getting pretty crafty these days.  So much so, that Lee Correctional Institution is installing new security towers equipped with thermal surveillance cameras to prevent UAV drones from smuggling contraband inside the walled facility such as cell phones, tobacco & marijuana. The incident that sparked the decision happened back in July when a man was arrested for trying to fly a drone over the 12 foot high razor wire perimeter fence last April to drop packaged contraband into the inmates inside.  The drone was found stashed in the bushes with the banned goods attached to it. The man they eventually connected to the incident, Brenton Lee Doyle, is said to not be cooperating with the investigation. They are still seeking a second man seen on security footage who also may be involved.

“The bottom line is these folks sit in prison all day and we try to keep them busy with different programs,” said prison Director Bryan Stirling. “But, they are sitting there all day thinking of ways to get things in, and we have to counterbalance that. These things are worth money in prison, and every time you get contraband in or cellphones, that’s when you have problems. A cellphone in the hands of an offender is a weapon.”

Stephanie Givens, a DOC spokeswoman, even noted that one of the more odd ways of smuggling included using a “potato gun” trying to launch contraband over the fence from a wooded area nearby.

The thermal surveillance cameras will offer an advantage over the criminals throwing illegal contraband over the fence which usually occurs at night. Prisoners are even known to stash illegal goods inside food, under rocks and in the grass. The smuggling is a huge issue in the prison system, which leads to a “commerce” behind bars that can turn deadly. In March 2010, Capt. Robert Johnson who was a guard at Lee (now since retired), was shot six times for enforcing contraband rules in the South Carolina corrections system.  The plot included a murder-for-hire assassination, orchestrated by several inmates who used illegal cellphones to execute the crime.  One of the inmates involved, Sean Echols (who was already serving time for unrelated offenses) was sentenced to an additional 20 years in prison for ordering the hit from his cell.

Other changes being implemented with the thermal surveillance cameras include staffing the front gate of the department’s headquarters located on Broad River Road, which was previously unmanned. Now, anyone driving through the gate will be checked-in by correctional officers for extra security. Director Stirling also noted that thermal surveillance cameras will most likely be installed at other locations as well. “My main focus is that public servants that work at the Department of Corrections are able to go home to their families at night,” he said.

He also added that 50 of his officers have gone through crisis intervention training, teaching the officers how to avoid potentially dangerous situations involving both officers and inmates. “Shortly after they went through the training, one of our officers talked someone out of swallowing a razor blade,” Stirling said. “If you’re going to cut yourself, you probably have no regard for others’ safety.”