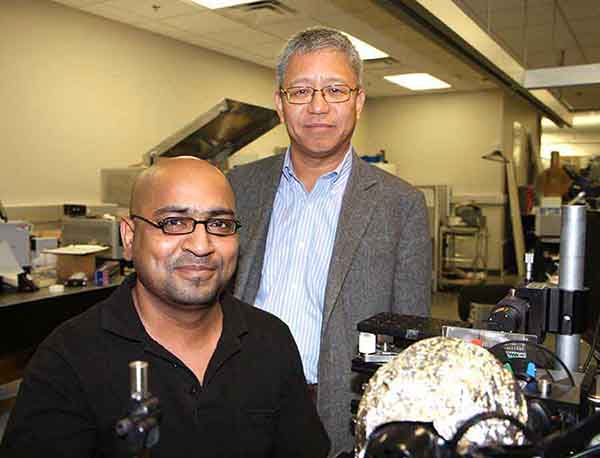 Historically, night vision & thermal imaging sensors have been a bit pricey for the common man.   The older BST cooled thermal sensors were costly and lunky.  With the advent of the uncooled microbolometer, pricing came down and so did size, but the need to isolate the semiconductor material was still there.  We’ve written before about the potential of using graphene in the thermal imaging industry, but now a more cost effective solution may be right around the corner. Now, researchers at UT Dallas have developed a CMOS sensor that goes above and beyond its predecessors’ capabilities, engineering a far infrared imaging CMOS detector measuring & imaging wavelengths up to 10 terahertz.  (10 terahertz being the highest frequency for most electronic devices).  And they don’t plan on stopping there.  Future research plans call for increasing that range to 40 terahertz.

UT’s far infrared imaging device was created using Schottky diodes in CMOS (Complementary Metal-Oxide Semiconductor) technology, the sort of technology responsible for affordable every day electronics such as home computers & high definition televisions.  What makes CMOS type devices so great is that they are very affordable and can also be easily integrated into smart phone devices as well.

According to Zeshan Ahmad, lead author of the work, electrical engineering doctoral candidate and a research assistant in TxACE,  “There are no existing electronic detection systems operating in CMOS that can reach above 5 terahertz.  We designed our chip in such a way that it can be mass produced inexpensively, has a smaller pixel and operates at higher frequencies.”

The evolution of thermal imaging & night vision sensors didn’t exactly happen overnight, either.  Adds Dr. Kenneth O, professor of electrical engineering in the Jonsson School and director of TxACE, “Twenty years ago, we were struggling to build CMOS circuits operating at 1 gigahertz. Now we are building circuits working at frequencies that are 10,000 times higher.”

“This technology could provide a very superior means to use the infrared portion of the spectrum,” added Dr. Robert Doering, research strategy manager at Texas Instruments. “Electronic control of generating infrared directly from CMOS integrated circuits will enable a wide variety of important new applications.”

Future implementations could include vast improvements on not only sensor production cost, but also existing far infrared imaging & night vision cameras in vehicles to aid in detecting animals on the roadway,  thermography devices for home & industrial energy audits, finding pipes & insulation issues and better intrusion detection systems that operate in both daytime and darkness.

The work was conducted in collaboration with researchers from Goethe University Frankfurt and Vilnius University in Lithuania.